Father William was born on December 22, 1970, in Medellin, Colombia. He is the third of six children. After studying elementary and junior high he left to study at a minor seminary of Medellin. He graduated from high school in 1987 and after he joined the seminary, where he completed his three years in philosophy. He continued his studies at Pontificia Boliviana University, where he majored in philosophy and literature. Immediately after his graduation, he went back to the seminary to finish his formation. As part of his priestly formation he graduated in theology and completed his internship at Ave Maria Parish in Medellin. He was ordained Deacon on October 31st, 1999 and spent six months at a Benediction Monastery. Shortly after he was ordained a priest, on December 9th, 2000. After a few assignments in Colombia, he was invited to come to Los Angeles and minister to the people of the Archdiocese, which he has been doing for the last 14 years. His last assignment was at Our Lady of Peace in North Hills from 2014 to 2018. 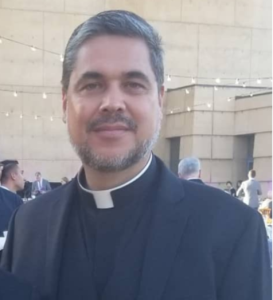